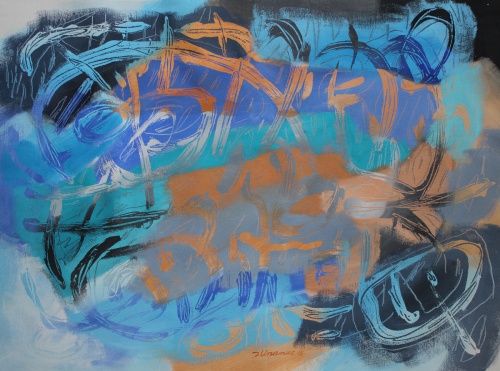 Sponsored by
the General Consulate of Chile in Barcelona

The series titled My Ancient Land expresses Ms. Unanue’s visual inspiration of a selection of compositions of an outstanding group of Chilean composers, who represent the “classical musical voice” of Chile in dynamic, vibrant and expressive works of art that have been created using different techniques and mediums but that convey the deep love of the artists’s native land and her understanding of the magic of these compositions.

Jacqueline Unanue paints from the unconscious: a lyrical abstraction of uncontrollable feelings.

In 1910, when Kandinsky reached abstraction in the visual arts, he did it through music as this has — by nature — always been the language of abstraction.

In her works, Jacqueline Unanue establishes a bond from her paintings her interpretation of the music of great composers is from the motions provoked by a world of sensations: the feeling that stems from music that thrives to communicate with colors the inner feeling; with strokes of great freedom to capture the feeling of extension to the body with this one motion, and not to allow the fusion of these two abstract worlds to be hindered by reason, even for an instant.

The profoundness of acting from the subconscious has been apparent in the whole of the twentieth century and part of the twenty-first. We could say that in Unanue’s works reflect the informal attitude of the action paintings of the 40s and 50s--like Pollock and about her forms more closely attributed to Armenian artist Gorky. This attitude is visible in the magnificently collection of her traveling exhibit starting in Washington DC and culminating in Barcelona.

Twice she has obtained grants sponsored by DIRAC, Directorate of Cultural Affairs of the Ministry of Foreign Affairs of Chile, for her exhibition in Quito, Ecuador, and at Inter-American Development Bank IDB, Washington DC, United States. Recently she was awarded the 2015 Latin American Women in the Arts & Culture Tribute in New York representing Chile.

Since 1983 she has been exhibited in numerous individual and group exhibitions in Chile, Spain, Finland, Ecuador, Argentina, and the United States—in galleries in Washington D.C., Philadelphia, Chicago, and New York.

Unanue currently lives in Philadelphia with her husband designer and artist Ricardo Guajardo.

She is represented by the 3rd Street Gallery, Philadelphia.