Jacqueline Unanue : My Ancient Land at the Gallery Embassy of Chile, Washington, DC 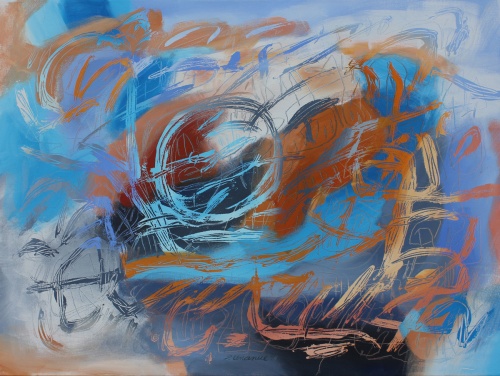 My Ancient Land, this most recent series of abstract paintings is inspired by the music of the Chilean composers: René Amengual, Eulogio Dávalos, Juan Orrego-Salas, Enrique Soro, Sylvia Soublette and Jorge Urrutia

Exhibition
Curated by Gloria Garafulich-Grabois
Presented by The Embassay of Chile, Washington DC

“Immersed in this music, as I painted, I found myself expressing both the movement of the music and my own emotions in free and spontaneous brush strokes that are musical as well as gestural.”

The colors she has used suggest -in an abstract way-her memories of the geography, the forest, the desert, the   ocean, and the Chilean sky.

Those memories are locked to both, the experiences she had in her many visits to Spain to connect with her father’s ancestral roots and also with her experience in the United States where she has lived for fifteen years and where she continues to develop an artistic vision formed by her multi-cultural experiences.

These paintings some of them of big dimensions will lead the viewer to an origin-time with a universal root.

“The exhibit is an invitation to discover or rediscover the composers whose classical work have offered the inspiration for this series. It also invites and encourages new generations to become familiar with the composers and their work as part of the experience and continued appreciation of the arts, in this case the disciplines of classical music and the visual arts.”

Unanue studied design at the Universidad de Chile, Valparaíso. She traveled extensively doing on-site rock art research through Chileʼs Atacama Desert, and also to study the Altamira caves, in the Basque Country, Spain, which as the home of her paternal ancestors connected her to her roots.

Recently she was nominated and was awarded the 2015 Latin American Women in the Arts & Culture Tribute in New York representing Chile.  She won the Critic’s Award in Visual Arts from the Valparaiso Art Critics Association in Chile. On two occasions she has obtained grants sponsored by DIRAC, the Directorate of Cultural Affairs of the Ministry of Foreign Affairs of Chile for her exhibits at Guayasamin Foundation, Quito, Ecuador, and at the Inter-American Development Bank, in Washington DC.

In addition to numerous individual and group exhibitions in Chile since 1983, she has also exhibited her work in Spain, Finland, Ecuador, Argentina, and the United States— in galleries in Washington D.C., Philadelphia, Chicago, and New York.

Since 2000, Unanue resides in Philadelphia (PA), with her husband designer Ricardo Guajardo. She is represented by the 3rd Street Gallery, Philadelphia.