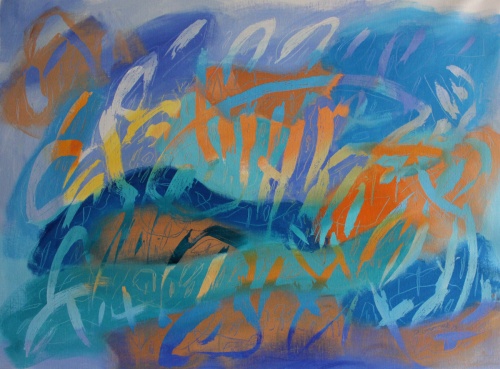 Jacqueline Unanue is part of this six Philadelphia-based artists exhibition featuring over sixty original works throughout the hallways waiting areas and exam rooms of the Center. Featured 15 of her works inspired by classical music by Czech composer Bedřich Smetana and by four Chilean composers. Exhibition curated Eric Preisendanz.

The exhibition is wheelchair accessible and family friendly.

Jacqueline Unanue is a Chilean American artist of Spanish ancestry residing and working in Philadelphia (PA), since 2000.

She studied design at the Universidad de Chile, Valparaíso, and received formal training in drawing, painting, art history and textile art. While a student, she became interested in the rock art found in her country where she met world-renowned archaeologist, Hans Niemeyer, who soon became her mentor. Together with her husband Ricardo Guajardo, who is also a designer and artist, she traveled extensively through Chile’s Atacama Desert doing on-site rock art research in the solitary valleys, mountains and cliff areas where original ancient rock paintings and carvings exist. In Spain, she studied the pre-historic paintings of the Altamira caves in the Basque Country, the home of her paternal ancestors.

In 1989 Unanue received the invitation to the prestigious Primeras Jornadas del Color, an international art encounter and lecture series in Catalonia, Spain, and the Critic’s Award in Visual Arts from the Valparaíso Art Critics Association in Chile. She was awarded grants sponsored by the Directorate of Cultural Affairs of the Ministry of Foreign Affairs of Chile (DIRAC) for her solo exhibits at Guayasamín Foundation in Ecuador (1997), and at the Inter-American Development Bank in Washington DC (2000). In 2015, she received the Latin American Women in Art and Cultural Tribute recognition in New York.

Jacqueline Unanue’s work has been shown in both solo and group exhibitions around the world.