Alonzo Troy Humphrey was born in Chattanooga Tennessee on September 27th, 1960. Alonzo is constantly drawing in sketchbooks and on scraps of paper, referencing an eclectic range of imagery from his past and present daily life (often portraiture), television, art-historical work, and mundane city, suburban, and rural landscapes. “I draw anything, whether it’s pretty or ugly,” he says of his subject matter.  If asked to identify subjects, Alonzo will often state that his sources come from “out of [his] head,” claiming no direct association with actual people or places. In truth, Alonzo has an amazing visual memory, mentally recording everything he sees through the process of drawing and then rehashing familiar imagery throughout his work.  He often will roughly draft an image from observation and later redraw the same image, showing heightened detail and greater accuracy when relying on his memory than through the initial observational process. Alonzo works quickly, with a sureness of line and boldness of image. Despite living with disabilities that at times inhibit his verbal articulation and social interaction, Alonzo’s moody and expressive works reveal the depth and complexity of his character with a striking clarity. 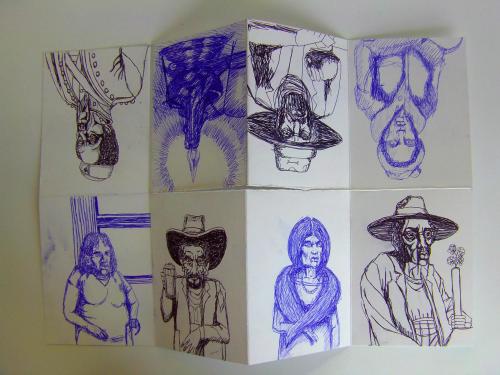